Archive for the ‘Press’ Category

Trials and Tests of Faith

Most of Paul Turk’s trials have occurred in a courtroom. After 30 years of courtroom drama, the West Palm Beach, Fla., attorney recently published his first novel.

Faith Beyond the Trials is an action-packed work of fiction that touches on marriage, family and loss. The story focuses on the marriage of a high-profile Palm Beach couple, a tense courtroom drama, and faith put to the test. Turk spoke to Register correspondent Patrick Novecosky about how his own personal tragedies — and the hand of God — catapulted him from the courtroom to a new career as an author.

Wellington, Florida – For years Paul Turk practiced law as a board certified trial lawyer at one of Florida’s oldest and most prestigious law firms, Gunster Yoakley. Yet throughout his career he always carried a dream to write a novel.

Turk says he wants to inspire his readers with Faith Beyond the Trials. If they’re not moved by one topic, they’ll likely be affected by another as the book draws readers into the marriage of a high-profile Palm Beach couple, a tense court room drama, and a faith that is tried and tested. The storyline includes the influences of a Priest and individuals at a local food pantry.

The novel’s legal drama, based in West Palm Beach, swirls around issues of drinking and driving. “It’s such an important issue,” says Turk. “There are so many cases in our country. I want readers to realize that even ‘normal drinking’ as some may call it, can result in devastating consequences when you get behind a wheel.”

Turk says the case he unveils in his novel is far from an open – shut case scenario, hoping it will keep the readers turning the pages.

Turk’s strategy seems to be working as the book is endorsed by both leaders in the legal arena and those in the faith-based sect.

Attorney and author Bette Kester Conrad says, “The book is sterling…with enough action to keep even the most casual reader reading well into the night.”

The story includes more than a legal thriller, as it addresses themes of marriage via the main characters, John and his wife, loosely based on Turk’s longtime marriage to his high school sweetheart, Katherine.

The fictitious John has a marriage that was made in heaven, but it gets put through the fires of hell.

The novel’s court room scenes are based on Turk’s real life experiences as a litigator. It took him about three months to craft the novel.

Turk was raised Catholic and his faith has strengthened over the years.

As a member of St. Rita’s Catholic Church for nearly three decades, Turk says he wanted to depict the fictional priest as a positive role model after seeing so much negative publicity about priests in the news.

“Priests have gotten so much bad press, yet there are so many incredible ones,” he contends. “One of my priests has become a lifelong hero for me.”

Turk’s faith was tested and grew through several tragic losses.

“I lost my brother to cancer at age 45, and I started to think about issues of security and things we have no control over,” Turk explains. “Then my family lost three cousins over the following three years. Those losses had a real impact on me.”

“My faith grew as I learned we can not store treasures here on earth. I’ve never met someone who is happy just because they have money,” he says.

A sentiment that is found in a special prayer Turk penned in the book called, “In times of trouble and doubt.”

In his novel, Turk draws from his personal experience serving as a volunteer and board member at Oasis Compassion Agency, a ministry that helps the homeless and hungry in West Palm Beach, Florida.

Turk says a priest influenced his desire to serve others by telling him how important it is that we get our minds off of ourselves, count our blessings, and reach out to others.

Posted in General, Press | No Comments » 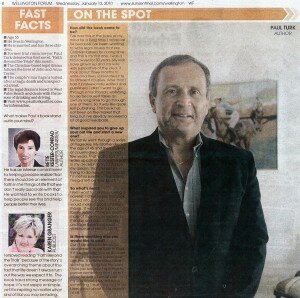 Paul Turk was featured in the Sun Sentinel on Wednesday, January 13th 2010! Click the image on the left to read the full article.

as a board-certified trial lawyer at one of Florida’s most prestigious law firms …  Visit the Good News here.